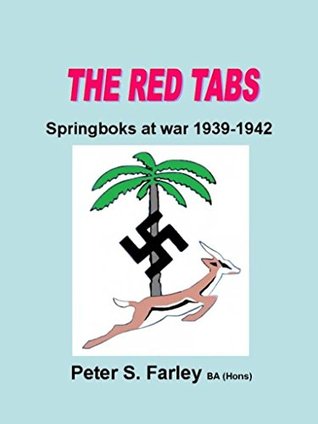 A quarter of a million South Africans, volunteered to fight in Britains war against Hitlers African army and wore a strip of red fabric on the epaulettes of their tunic. The strips were aptly named The Red Tabs which denoted that the wearer had volunteered. The Springboks first objective was to push the Italians out of their East African Empire and then travel north to team up with the British in their fight against the Germans- who were under the command of the famous General Rommel.

The book relates the numerous battles where the South Africans fought with bayonet, artillery pieces and armoured tanks. At one battle known as Sidi Rezegh, the 5th South African Brigade suffered the loss of 3394 troops, who were either killed or taken prisoner.

At another lesser known place called Acroma Keep, a troop of South Africans became the last to fend off Rommel’s army prior to the fall of Tobruk, where close on 30 000 prisoners fell into the hands of the Germans. During the eventful battle at Acroma, an unexpected truce was arranged- something that is seldom seen in warfare and never before written about.

The book culminates with the account of the Allies’ triumphant engagement at El Alamein, when 800 artillery guns opened fire on the German defences. The barrage, which was continuous for twenty minutes, caused flashes to light up the skyline, like a sheet of lightning and afterwards, was followed by an infantry onslaught, of a magnitude never seen before in the Desert. The story is simply told and lavishly complemented with personal anecdotes from veteran South African soldiers. Illustrated with maps and previously unpublished photographs, the book can be a useful tool in the understanding of the North African Campaign.