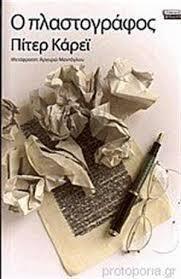 The mystery--the origin of a brilliant but purportedly faked poem--fuels a whirlwind pursuit through Australia and across the wilds of Malaysia. Grappling with her own childhood demons, Careys bibliophile sleuth, Sarah Wode-Douglass, sometimes becomes lost in the exotic and bloody chase. The novel opens as Sarah, the reluctant tourist and editor of The Modern Review, is dragged by a foppish poet-friend, John Slater, to Kuala Lumpur. Sarah is intent on biding her time in her hotel, but a chance encounter with a scabrous reader of Rilke soon transforms Sarahs plans and, ultimately, her life.

The reader, the Australian poet Christopher Chubb, is the disgraced initiator of a great literary hoax--the faked poems of the non-existent Bob McCorkle. The McCorkle hoax was Chubbs attempt to bring down a rising poetry editor, David Weiss.

When the hoax was exposed, Weiss was believed to have committed suicide. But, living in exile, Chubb has hidden a secret for decades: Bob McCorkle had seemingly materialized in human form, killing Weiss and destroying Chubbs life. Sarah is tantalized by a fragment of supposed McCorkle poetry that Chubb has shared with her. Whether it is a fake or the work of a madman, Sarah believes it is genius.

Her obsession, however, drives her and Chubb to the precipice of self-destruction.The primary story--Chubbs pursuit of McCorkle--lives in the fictional past, and the plot occasionally becomes muddled in the nest of narrators recalling conversations second or third hand.

In playing out the McCorkle affair, Careys denouement comes too quickly. If Sarah is transformed, Carey doesnt reveal enough of her in the text. He is mesmerized, as is the reader, by Chubbs horrific tale.With its small shortcomings, the novel offers a sophisticated interrogation of authorship and fakery and the power of art. Carey avoids simplifying the McCorkle mystery, leaving the reader to puzzle out McCorkles bizarre incarnation. While My Life as a Fake is frequently entertaining, the atmospheric mystery occasionally glimpses the profound. --Patrick OKelley