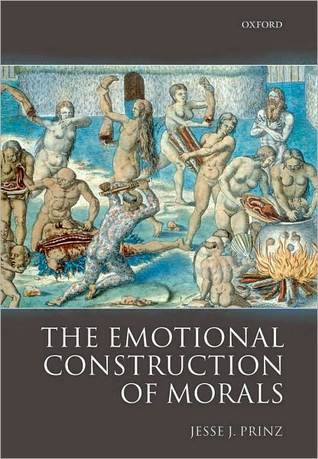 Evidence from brain imaging, social psychology, and psychopathology suggest that, when we judge something to be right or wrong, we are merely expressing our emotions. Prinz argues that these emotions do not track objective features of reality- rather, the rightness and wrongness of an act consists in the fact that people are disposed to have certain emotions towards it.

In the second half of the book, he turns to a defense of moral relativism. Moral facts depend on emotional responses, and emotional responses vary from culture to culture. Prinz surveys the anthropological record to establish moral variation, and he draws on cultural history to show how attitudes toward practices such as cannibalism and marriage change over time. He also criticizes evidence from animal behavior and child development that has been taken to support the claim that moral attitudes are hard-wired by natural selection. Prinz concludes that there is no single true morality, but he also argues that some moral values are better than others- moral progress is possible.Throughout the book, Prinz relates his views to contemporary and historical work in philosophical ethics.

His views echo themes in the writings of David Hume and Friedrich Nietzsche, but Prinz supports, extends, and revises these classic theories using the resources of cutting-edge cognitive science. The Emotional Construction of Morals will stimulate and challenge anyone who is curious about the nature and origin of moral values.

Comments
Comments for "The Emotional Construction of Morals":