A Fallen Eagle: WWII B-24 Pilot in the 15th Air Force with the 450th Bg Cottontails Clarence P. Cowart 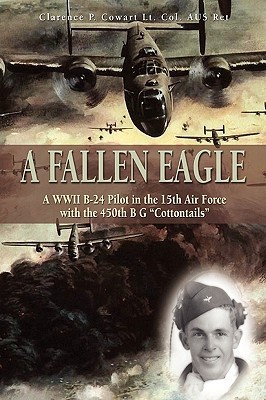 He entered the service with only a high school education and limited experience, other than working on a farm. His desire to be a pilot drove him to overcome numerous obstacles to be accepted into pilot training. He persevered through rigorous training to earn his wings. After receiving his wings, he became a B-24 pilot assigned to the 722nd Squadron of the 450th Bomb Group. When his unit training was completed, he was assigned to the 15th Air Force, operating out of Italy. He flew missions over most of Europe and the Balkans.

Through over 75 of his personal letters, he shares his experiences, both emotional and physical, as he went from being a farm boy to being a heavy bomber pilot. He flew in dangerous combat situations, saw the horrors of aerial battle, and ultimately, gave his life in the service of his country. The human side of the tragedy is told not only in his letters, but by letters of the crews next of kin and government correspondence in the aftermath.

The final chapter describes the detailed government process to recover, make positive identification, and return his remains to the states. CLARENCE P. COWART was born in Groves, Texas, grew up in Jasper, Texas and graduated from Texas A & M College. Upon his graduation, he entered the service at Ft. Bliss, Texas and graduated from Missile School. After serving his active duty obligation, he returned to East Texas and joined the Army Reserves. His first assignment was as a Platoon Leader in an infantry unit. His next assignment was in an Artillery Unit in Beaumont, Texas where he served in several positions.

He served four years as Headquarters Company Commander in a support group. Through the years he served in several units, the last was as the Commander of a transportation battalion. After twenty-one years of service he retired as a Lt. Colonel. While serving in the reserves, his civilian jobs involved working in numerous positions in municipal government in Southeast Texas. He retired from the City of Beaumont. He and his wife, Dixie raised two children.

They now have four grandchildren and one great granddaughter. They are retired and currently live in Lumberton, Texas. Colonel Cowart is active in the church where he attends, is an avid hunter, competitive shooter, and military arms collector. He operates a part-time design and inspection service from his home. His interest in WWII history led him to write A Fallen Eagle.

Comments
Comments for "A Fallen Eagle: WWII B-24 Pilot in the 15th Air Force with the 450th Bg Cottontails":